What does your cat’s meow mean? 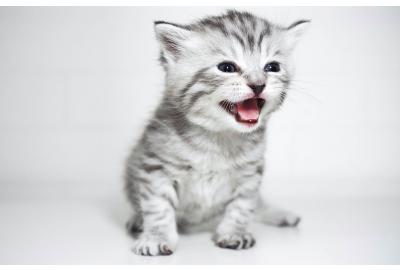 What does your cat’s meow mean?

The main forms of communication for adult cats in the wild are through scent, facial expressions, complex body language, and touch.

Meowing isn’t actually part of natural cat language. It would seem that it was developed to communicate with humans.

There is one reason a cat might meow to another cat, though…

Young kitten’s ‘mews’ are an endearing sound, which they use to get attention from their mother. But once the kitties grow, the mew and meow interaction between them and their mother stops.

Why did cats develop meows for humans?

The worrying ‘meow’ or the cute ‘mew’ is what gets you to do what your cat wants. This means the meowing eventually develops into a fully-fledged second language for your companion to communicate with you.

There’s likely to be a few dozen meow sounds that your cat makes. A short, high-pitched meow tends to mean ‘Hello’, and a few of those in a sentence might mean ‘Yay, you’re home!’.

Gentle meows are usually requests for food, attention, or to go outside. But bear in mind your cat will learn individual meows that get your attention, so don’t be surprised if they don’t follow this exact pattern.

Louder or harsher meows are for demands or to express anger – this is pretty universal.

If you’re a cat person, you’ll get it way more than those who aren’t

Dr. Nicholas Nicastro, who did research into a human’s ability to understand meows, discovered that people who own a cat are much better at understanding the meaning of a meow than those who don’t. His research showed (unsurprisingly) that people who don’t have cats couldn’t really make out what meows meant. Those who do, understood 40% of meows.

What do common meows and mews mean?

Your cat is likely to develop her own language just for you. But there are a handful of very common meows:

All in all, we think it’s cool that our little furballs develop a language just for us. The better we can understand what their individual meows mean, the easier it is to live side by side.

Don’t tell the non-cat people though, they won’t understand.